The United States of War: An Addiction to Imperialism 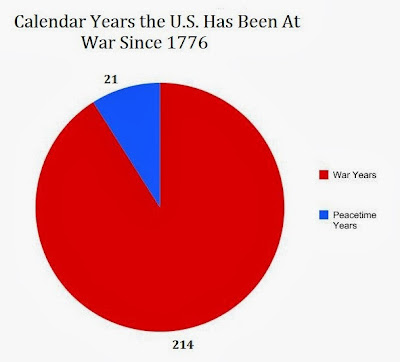 The U.S. is Number One is weapons of war and domestic civilian gun deaths – and very little else. Historically, peace has not been a priority for the United States, which has waged war every decade since 1776. “The people must demand an end to war, not because it costs trillions of dollars, but because it cost millions of lives.”

A common description for the term addiction is, “the continued repetition of a behavior despite adverse consequences, or a neurological impairment leading to such behaviors…” This definition is most appropriate in regard to the world’s most destructive killing machine – the United States military. The United States government has long developed an acquired taste for war. And because much of the US population is completely obsequious to whatever their duplicitous government tells them, they, too, have become complacent to a perpetual state of war. Americans punch-drunk on nationalism fail to realize that “their” government is beholden to the interests of imperialism, not their general well being. Like well controlled puppets they chant, “USA number one”, over and over and over again, failing to ever question what “their” country is actually number one in.

The mental sickness of “American Exceptionalism” maintains the asylum known as American society. American Exceptionalism designs baseless sayings like, “USA number one.” US society is an extremely competitive and insecure environment. Ultimately, a place that encourages its citizens to ritualistically chant how good they are is not so sure of itself. Either that, or it does not wish the Hoi Polloi to ever question their government at all. The US is not number one in quality of life, education or overall healthcare. The USA is not even the happiest nation in the world, by a long shot. However, a few things the United States is number one in are: incarceration, gun related deaths and yes, military expenditure.

These are among some of the unsavory rubrics in which the US reigns supreme. If Americans meant any of those areas when they blindly chant, “USA number one”, then they would be spot on, especially when it comes to military “firepower.” With around 1,000 military bases, well over 10,000 nuclear warheads, and an almost constant state of war, the US is numero uno, without rival. The US is an imperialist monster with a voracious appetite for destruction. It has an uncontrollable appetite for war, caring little what it murders on its way toward global domination. This is evident in the vast number of civilians killed as a result of the US’s military campaigns. The vast majority of people murdered when the US decides to unleash its war machine, are, in fact, civilians. This is news to most Americans because they have been socially programmed to not even think about civilian casualties. They only worry about US military casualties as if those are the only lives that matter. Thinking about the catastrophic impact their government’s wars inflict upon innocent people, in “far off lands”, is well beyond many Americans’ social radar. This mode of thinking (or lack there of) has conditioned numerous Americans to lose vast segments of their humanity.

It is of little surprise that the United States government cares little about the “adverse consequences” that come with being constantly entrenched in war and global conflict. However, when the populace have adopted that inhumane way of thinking it paves a destructive road that we are traveling upon. The people are the ones whose responsibility it is to, not request, but demand an end to these wars of imperialism. Unfortunately, the United States’ mind control program, otherwise known as corporate media, has had a firm grip on the conscience of many Americans. This fact continues to prevent Americans from understanding that the people being terrorized by the US’s imperialist wars, are human beings – just like them. It especially prevents them from understanding that people in places like Afghanistan are, in fact, being terrorized by the US military.

Americans have bought into the orchestrated mythology that “their country,” when it enters/instigates a war, is doing so for some sort of benevolent reasons. Historically speaking, this could not be further from the truth, especially when we consider the number of civilians killed. Since World War I there has been a complete reversal of civilian deaths. During World War I, 10% of all casualties were civilians. During World War II, the number of civilian deaths rose to 50%. During the Vietnam War 70% of all casualties were civilians. In the war in Iraq, civilians account for 90% of all deaths. And when we look at the number of civilians killed by way of George Bush and Barack Obama’s drone strikes (alone), more that 90 percent of the victims have been civilians. However, don’t look at the fourth branch of the US government (the corporate media), to inform you of this. They, like the Pentagon and White House, could not give a damn about the number of innocent civilians killed. When former head of the Joint Chiefs of Staff (and Secretary of State) Colin Powell was asked, in 1991, about the number of Iraqi civilians killed as a result of the US Gulf War against Iraq, he simply stated: “Its not a number I’m terribly interested in.” It is important to note that the Associated Press at the time quoted US military officials in Riyadh, Saudi Arabia, estimating that the number of Iraqi dead at 100,000. However, other independent estimates place the number much higher. Not surprising, the Pentagon refused to provide an estimate of the number of dead Iraqi civilians.

The shear lack of regard for human life, especially that of civilians, is akin to that of a serial killer. The US military apparatus operates like that of a pathological killing machine with lust for war. The history of the United States more than backs up this assertion, especially when we consider the fact that since the US’s “founding” in 1776, this country has been at war 216 of those years. That’s right, out of the US’s 237 year existence it has been engaged in military conflict 216 of those years. If that is not an addiction to war, this author does not know what is. The US has never gone a decade without being engaged in some sort of military conflict.

United States imperialism is destroying the world, one nation at time. And within those nations are living breathing human beings. Is it really hard to fathom why many people despise the US? It has nothing to do with Americans’ so-called “freedoms” – instead, it has everything to do with the military destruction of their countries. The politicians that ultimately control the US military care little about the soldiers they command to fight in their capitalist conquests of wealth and resources. And they certainly could not give a damn about the innocent civilians in places like Libya, Pakistan and Yemen. They are not concerned with how they are perceived by much of the globe; they are only concerned with maintaining their imperialist advancements and control. You are either “with them” or “against them”; there is no middle ground. And for these reasons it should be crystal clear why people living within the United State must care.

Organized critical masses of concerned people must serve as the moral compass, and rehabilitation, needed to end the US’s addiction to war. Bluntly put, humanity depends on it. The people must demand an end to war, not because it costs trillions of dollars, but because it cost millions of lives. There is no dollar amount that can be used to measure a human’s life. All human life must be seen as invaluable, period. An American life is no more valuable than that of someone from any country in which the U.S. is waging war. The financial cost of war is enormous and is an issue, in and of itself – however, this cost pales in comparison to the cost of human life.

We must unite and be prepared to organize to end the culture of war within the US. Ending the culture of war in this country will pave the way for wars to cease globally, especially since the US global war footprint is virtually everywhere. Creating a culture of peace begins with changing our acceptance of the United States’ addiction to war. Demanding this radical, yet humane, change to take place is paramount if we are to mold a brighter future for subsequent generations. Peace starts with all of us. It is one of the most important tasks before us. We must be firmly against war, in addition to being for peace. They go hand in hand. Now is the time to start building that brighter and more humane future.

Mr. Comissiong is also a founding member of the Pan-African collective for Advocacy & Action. Solomon is the author of A Hip Hop Activist Speaks Out on Social Issues. He can be reached at: solo@yourworldnews.org.
Solomon Comissiong is an educator, community activist, author, and the host of the Your World News media collective (