The Subject Supposed to Loot and Rape: Reality and Fantasy in New Orleans

International Journal of Radical Critique via IN THESE TIMES, Originally Published on 10.20.05 | by
SLAVOJ ŽIŽEK

According to a well-known anecdote, anthropologists studying “primitives” who supposedly held certain superstitious beliefs (that they descend from a fish or from a bird, for example) asked them directly whether they “really” believed such things. They answered: “Of course not–we ‘re not stupid! But I was told that some of our ancestors actually did believe that.” In short, they transferred their belief onto another. 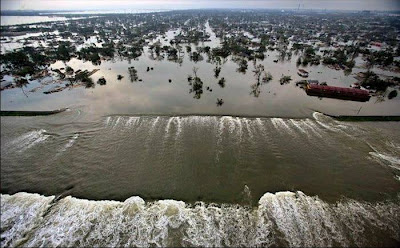 We do the same thing with our children by going through the ritual of Santa Claus. Since our children (are supposed to) believe in him and we do not want to disappoint them, they pretend to believe so as not to disappoint us by puncturing our belief in their naivety (and to get the presents, of course). Isn’t this also the usual excuse of the mythical crooked politician who turns honest? “I cannot disappoint the ordinary people who believe in me.” Furthermore, this need to find another who “really believes” is also what propels us to stigmatize the Other as a (religious or ethnic) “fundamentalist.” In an uncanny way, some beliefs always seem to function “at a distance.” In order for the belief to function, there has to be some ultimate guarantor of it, and yet this guarantor is always deferred, displaced, never present in persona. The point, of course, is that this other subject who directly believes does not need to actually exist for the belief to be operative: It is enough precisely to presuppose his existence, i.e. to believe in it, either in the guise of the primitive Other or in the guise of the impersonal “one” (“one believes…”).

The events in New Orleans after Hurricane Katrina struck the city provide a new addition to this series of “subjects supposed to…”–the subject supposed to loot and rape. We all remember the reports on the disintegration of public order, the explosion of black violence, rape and looting. However, later inquiries demonstrated that, in the large majority of cases, these alleged orgies of violence did not occur: Non-verified rumors were simply reported as facts by the media. For example, on September 3, the Superintendent of the New Orleans Police Department told the New York Times about conditions at the Convention Center: “The tourists are walking around there, and as soon as these individuals see them, they ‘re being preyed upon. They are beating, they are raping them in the streets.” In an interview just weeks later, he conceded that some of his most shocking statements turned out to be untrue: “We have no official reports to document any murder. Not one official report of rape or sexual assault.”

The reality of poor blacks, abandoned and left without means to survive, was thus transformed into the specter of blacks exploding violently, of tourists robbed and killed on streets that had slid into anarchy, of the Superdome ruled by gangs that were raping women and children. These reports were not merely words, they were words that had precise material effects: They generated fears that caused some police officers to quit and led the authorities to change troop deployments, delay medical evacuations and ground helicopters. Acadian Ambulance Company, for example, locked down its cars after word came that armed robbers had looted all of the water from a firehouse in Covington–a report that proved totally untrue.

Of course, the sense of menace had been ignited by genuine disorder and violence: Looting, ranging from base thievery to foraging for the necessities of life, did occur after the storm passed over New Orleans. However, the (limited) reality of crimes in no way exonerates “reports” on the total breakdown of law and order–not because these reports were “exaggerated,” but for a much more radical reason. Jacques Lacan claimed that, even if the patient’s wife is really sleeping around with other men, the patient ‘s jealousy is still to be treated as a pathological condition. In a homologous way, even if rich Jews in early 1930s Germany “really” had exploited German workers, seduced their daughters and dominated the popular press, the Nazis ’ anti-Semitism would still have been an emphatically “untrue,” pathological ideological condition. Why? Because the causes of all social antagonisms were projected onto the “Jew”–an object of perverted love-hatred, a spectral figure of mixed fascination and disgust.

And exactly the same goes for the looting in New Orleans: Even if all the reports on violence and rapes had proven to be factually true, the stories circulating about them would still be “pathological” and racist, since what motivated these stories were not facts, but racist prejudices, the satisfaction felt by those who would be able to say: “You see, Blacks really are like that, violent barbarians under the thin layer of civilization!” In other words, we would be dealing with what could be called lying in the guise of truth: Even if what I am saying is factually true, the motives that make me say it are false.

Of course, we never openly admit these motives. But from time to time, they nonetheless pop up in our public space in a censored form, in the guise of denegation: Once evoked as an option, they are then immediately discarded. Recall the recent comments by William Bennett, the compulsive gambler and author of The Book of Virtues, on his call-in program “Morning in America”: “But I do know that it ‘s true that if you wanted to reduce crime, you could, if that were your sole purpose, you could abort every black baby in this country, and your crime rate would go down. That would be an impossibly ridiculous and morally reprehensible thing to do, but your crime rate would go down.” The White House spokesman immediately reacted: “The president believes the comments were not appropriate.” Two days later, Bennett qualified his statement: “I was putting a hypothetical proposition … and then said about it, it was morally reprehensible to recommend abortion of an entire group of people. But this is what happens when you argue that ends can justify the means.” This is exactly what Freud meant when he wrote that the Unconscious knows no negation: The official (Christian, democratic … ) discourse is accompanied and sustained by a whole nest of obscene, brutal racist and sexist fantasies, which can only be admitted in a censored form.

But we are not dealing here only with good old racism. Something more is at stake, a fundamental feature of the emerging “global” society. On September 11, 2001, the Twin Towers were hit. Twelve years earlier, on November 9, 1989, the Berlin Wall fell. November 9 announced the “happy ’90s,” the Francis Fukuyama dream of the “end of history”: the belief that liberal democracy had, in principle, won, that the search is over, that the advent of a global, liberal world community lurks just around the corner, that the obstacles to this ultra-Hollywood happy ending are merely empirical and contingent (local pockets of resistance where the leaders did not yet grasp that their time is over). In contrast, 9/11 is the main symbol of the end of the Clintonite happy ’90s, of the forthcoming era in which new walls are emerging everywhere, between Israel and the West Bank, around the European Union, on the U.S.-Mexico border. The rise of the populist New Right is just the most prominent example of the urge to raise new walls.

A couple of years ago, an ominous decision of the European Union passed almost unnoticed: a plan to establish an all-European border police force to secure the isolation of the Union territory, so as to prevent the influx of the immigrants. This is the truth of globalization: the construction of new walls safeguarding the prosperous Europe from a flood of immigrants. One is tempted to resuscitate here the old Marxist “humanist” opposition of “relations between things” and “relations between persons”: In the much celebrated free circulation opened up by the global capitalism, it is “things” (commodities) which freely circulate, while the circulation of “persons” is more and more controlled. We are thus not dealing with “globalization as an unfinished project,” but with a true “dialectics of globalization.” The segregation of the people is the reality of economic globalization. This new racism of the developed world is in a way much more brutal than the previous one: Its implicit legitimization is neither naturalist (the “natural” superiority of the developed West) nor culturalist (we in the West also want to preserve our cultural identity). Rather, it ‘s an unabashed economic egotism–the fundamental divide is the one between those included into the sphere of (relative) economic prosperity and those excluded from it.

In the beginning of October 2005, the Spanish police, who have dealt with the problem of desperate African migrants trying to penetrate the small Spanish territory across Gibraltar with lethal force, displayed their plans to build a wall between the Spanish and Moroccan border. The images presented–a complex structure with all the latest electronic equipment–bore an uncanny resemblance to those of the Berlin Wall, only with the opposite motive, designed to prevent people from coming in, not getting out. The cruel irony is that it is the government of Zapatero, arguably the most anti-racist and tolerant in Europe, that is forced to adopt these measures of segregation–a clear sign of the limits of the multiculturalist “tolerant” approach which preaches open borders and acceptance of Others. It is thus becoming clear that the solution is not “tear down the walls and let them all in,” the easy, empty demand often put forth by soft-hearted liberal “radicals.” Rather, the real solution is to tear down the true wall, not the police one, but the social-economic one: To change society so that people will no longer desperately try to escape their own world.

This brings us back to rumours and “reports” about “subjects supposed to loot and rape:” New Orleans is one of those cities within the United States most heavily marked by the internal wall that separates the affluent from ghettoized blacks. And it is about those on the other side of the wall that we fantasize: More and more, they live in another world, in a blank zone that offers itself as a screen for the projection of our fears, anxieties and secret desires. The “subject supposed to loot and rape” is on the other side of the Wall–this is the subject about whom Bennett can afford to make his slips of the tongue and confess in a censored mode his murderous dreams. More than anything else, the rumors and fake reports from the aftermath of Katrina bear witness to the deep class division of American society.

Slavoj Žižek, a Slovenian philosopher and psychoanalyst, is a senior researcher at the Institute for Advanced Study in the Humanities, in Essen, Germany. He has also been a visiting professor at more than 10 universities around the world. Žižek is the author of many other books, including Living in the End Times, First As Tragedy, Then As Farce, The Fragile Absolute and Did Somebody Say Totalitarianism? He lives in London.