International Journal of Radical Critique via IN THESE TIMES, 03.26.2003 | by Zizek, Slavoj

The one good argument for war against Iraq is evoked by Christopher Hitchens: The majority of Iraqis are Saddam's victims, and they would be really glad to be rid of him. He is such a catastrophe for his country that an American occupation in whatever form is a much brighter prospect for Iraqi citizens. We are not talking here of "bringing Western democracy to Iraq," but of just getting rid of the nightmare called Saddam. To this majority, the caution expressed by Western liberals cannot but appear deeply hypocritical. Do they really care about how the Iraqi people feel? 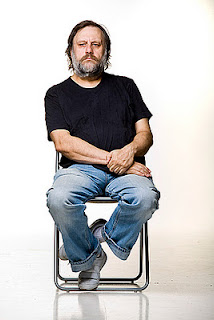 In the same vein, I remember dozens of Western leftists in the early '90s who proudly crowed that "Yugoslavia still exists," and reproached me for betraying the unique chance of maintaining Milosevic's Yugoslavia-to which I always answered that I am not yet ready to lead my life so that it will not disappoint Western leftist dreams. Few attitudes are more crassly ideological than a tenured Western academic arrogantly dismissing (or, even worse, "understanding") an Eastern European from an ex-communist country who longs for Western liberal democracy and some consumer goods.

However, it is all too easy to slip from this recognition to the notion that "under their skin, Iraqis are just like us, and really want the same as we do." All we need to do is just give people a chance, liberate them from their imposed constraints, and they will join us in our ideological dream. No wonder an American official used the term "capitalist revolution" to describe what Americans are now doing: exporting their revolution all around the world. They have moved from "containing" the enemy to a more aggressive stance. Like the defunct Soviet Union decades ago, the United States is now the country subversively fomenting world revolution. Bush recently declared: "The liberty we prize is not America's gift to the world, it is God's gift to humanity." Indeed, and the United States just happens to be the chosen instrument for distributing this gift.

Abstract pacifism is intellectually stupid and morally wrong-one has to stand up against a threat. Of course the fall of Saddam would be a relief to a large majority of Iraqi people, and a whiff of liberal hypocrisy does taint many of the stated reasons against war. But the impending invasion and occupation of Iraq is still wrong-because who is leading it makes it wrong. This is not a question of war or peace in the short term, but of the "gut feeling" that something is terribly wrong with this war, that something will irretrievably change with it.

One of Jacques Lacan's more outrageous statements is that, even if what a jealous husband claims about his unfaithful wife is all true, his jealousy is still pathological. The same should be said today about the claim that "Saddam has weapons of mass destruction!" Even if this claim is true (and it probably is, at least to some degree), it is still false with regard to the position from which it is enunciated. Everyone knows that this war is about more than weapons of mass destruction. But it is about more than oil, too. As ardent hawks William Kristol and Lawrence F. Kaplan write in their recent The War Over Iraq, the impending occupation "is about more even than the future of the Middle East and the war on terror. It is about what sort of role the United States intends to play in the twenty-first century."

One cannot but agree: The future of the international community is at stake now-the new rules that will regulate it, what the new world order will be. We are in the midst of a "silent revolution," in which the unwritten rules that determine the most elementary international logic are changing. Washington scolded German Prime Minister Gerhard Schröder, a democratically elected leader, for maintaining an anti-war stance supported by the large majority of Germans. In Turkey, according to opinion polls, 94 percent of the people are opposed to allowing U.S. troops in their country for the war. Where is democracy here? Those who pose as global defenders of democracy are the ones who are effectively undermining it.

It is crucial to remember that the present regime in Iraq is ultimately a secular nationalist one, out of touch with Muslim fundamentalist populism. Obviously, Saddam only superficially flirts with pan-Arab Muslim sentiment. As his past clearly demonstrates, he is a pragmatic ruler striving for power, who shifts alliances when it fits his purposes-first against Iran to grab their oil fields, then against Kuwait for the same reason, bringing against himself a pan-Arab coalition allied with the United States. Saddam is not a fundamentalist obsessed with the "Great Satan," ready to blow the world apart just to get him. What can emerge as a result of U.S. occupation, however, is a truly fundamentalist Muslim, anti-American movement, directly linked to such movements in other Muslim countries.

Direct American occupation of a large and key Arab country-how could this not generate a reaction of universal hatred? One can already imagine thousands of young people dreaming of becoming suicide bombers, and how that will force the U.S. government to impose a permanent high-alert emergency state. At this point, one cannot resist a slightly paranoid temptation: What if the people around Bush know this, what if this "collateral damage" is the true aim of the entire operation? What if the true target of the "war on terror" is American society itself-the disciplining of its emancipatory excesses?

On March 5, MSNBC's Buchanan and Press show displayed a photo of the recently captured Khalid Shaikh Mohammed, the "third man of al-Qaeda"-a mean visage, in an unspecified nightgown prison-dress, half opened and with something like bruises half-discernible, hints that he was already tortured. Pat Buchanan's fast voice was asking: "Should this man who knows all the names, all the detailed plans for the future terrorist attacks on the United States, be tortured, so that we get all this out of him?" The horror was that the photo already suggested the answer. No wonder the response of other commentators and viewers' calls was an overwhelming "Yes!"

This is a pretty close realization of what Orwell imagined in 1984's "hate sessions," where the citizens are shown photos of the traitors and supposed to boo and yell at them. And the story goes on: A day later, a FOX News commentator claimed that we are allowed to do with this prisoner whatever we want-deprive him of sleep, break his fingers, etc.-because he is "a piece of human garbage with no rights whatsoever." That such public statements are possible today is the true catastrophe.

We should therefore be very attentive not to fight ancillary battles: the debates on how bad Saddam is, or on how much the war will cost, even on how well (or poorly) the occupation is proceeding. The focus should be on what effectively goes on in our culture, on what kind of society is emerging here as the result of the "war on terror." The ultimate result of this war will be a change in our political order.